“Television Producer: Now I know you've been rehearsing at home, and you know your part. But project. You know, project. You're the frogmouth. You're loud, you're noisy, you're obnoxious. Lots of decibels, you got it?

The Frogmouth: [in a meek voice] I think so. No. No. Nobody would do this to me. It's a gag. Yes. Eases the tension. I was all stiff, now I'm all loosened up. This is a rehearsal everybody. Quiet on stage. Okay Wilma, throw the frogmouth his first cue.

Wilma Flintstone: Bill, the baby's college fund money is missing. Did you take it Bill?

The Frogmouth: [again in the meek voice] Yes I did, so what? You wanna make something out of it?

Television Producer: No, louder! Louder! You're the frogmouth, Be P-O-S-I-T-I-V-E!

The Frogmouth: [slightly raised, but still meek] Yes I did, so what? You wanna make something out of it?

Television Producer: Why me? I'm a good guy. It's too late to audition people. I could have gone to college, I could have learned a trade. But no, I had to be a television producer. And I wind up with a pollywog for a frogmouth. I'm ruined!”
— Wilma Flintstone, The Flintstones, Season 1: Hollyrock, Here I Come
Tagged: TV Shows, producers, Frogmouth, Audition
Share on Facebook
Share on Twitter 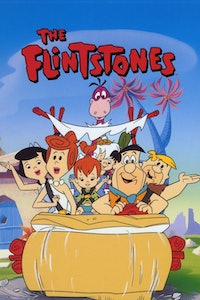