Put differently, language can’t be entirely explained by natural selection (or birds imbuing us with words), because language, like a knife or an iPhone, is a tool invented by humankind. Certainly the technology of a knife or an iPhone is in some way connected to natural selection; however, it’s also in a very real way an environmental creation that has laws outside of Darwinian biology. For Wolfe, this point is so important because it separates human from animal, because unlike the ape or the dog, humans have the technology of speech that allows to exist both in the natural world and in the invented world of words..

Wolfe has been criticized for calling evolution a myth. But Wolfe is a master of storytelling and certainly his statements are tinged with hyperbole that between the lines are comical to some and “dangerous” to others. But the point of Kingdom of Speech, to me, does not seem controversial when Wolfe writes.

“To say that animals evolved into man is like saying that Carrara marble evolved in to Michelangelo’s David. Speech is what man pays homage to in every moment he can imagine.”
— Tom Wolfe, The Kingdom of Speech

Evolution can still be the backbone; it's just to say that while a knife was ultimately a creation of evolution, to say the knife created evolution is a bit misleading. 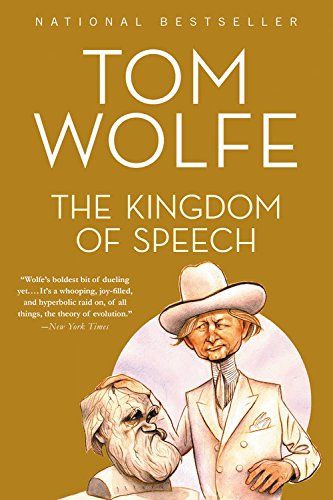 Read:
The Kingdom of Speech