“[Hannibal is strapping an unconscious B.A. to his seat on the plane.]
Amy: Excuse me, but what are you doing?

Hannibal: We're tying him up so he won't kill us if he comes-to.

Amy: [looking puzzled] I see. Excuse me again, but isn't he one of you, I mean isn't he on the team?

Amy: So then why do you have to drug him?

Hannibal: He hates the pilot.

Amy: Hates the pilot? Why?

Face: Because our pilot is insane.

Amy: [pointing at the cockpit] So he's up there now, flying us?

Face: Yes.
[Murdock, who should be flying the plane, walks past singing. Face gets up and leads him back to the cockpit]

Face: What a kidder!

Amy: I'm not sure you are exactly what I bargained for.

Hannibal: Let's get something straight right now. You want your friend back. The authorities shined you on, so you went out and hired a bunch of gun-fighters. Now, if you wanted someone with good manners, you should've hired an English butler.

Hannibal: We think so.

Amy: Are you still being chased by the government?

Amy: What I don't understand, is why you're not living in Switzerland, where it's safe?

Hannibal: Because we're not Swiss. We're Americans. We've got a little problem right now. But we'll work our way out of it somehow. In the mean time, we stick together and do what we do best.”
— John 'Hannibal' Smith, The A-Team, Season 1: Mexican Slayride
Tagged: pilot, insane, Americans, Switzerland
Share on Facebook
Share on Twitter 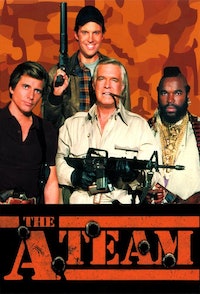