“Everything is amazing right now, and nobody's happy. ... Now, we live in an amazing, amazing world, and it's wasted on the crappiest generation of just spoiled idiots that don't care.

This is what people are like now: they've got their phones and they're like 'ugh, it won't--' GIVE IT A SECOND! It's going to SPACE! Can you give it a second to get back from space?? Is the speed of light too slow for you?!

I was on an airplane and there was high speed internet. That's the newest thing I know that exists. And I'm sitting there and they go 'open up your laptops you can go on the internet,' and it's fast, and I'm watching YouTube clips, I'm in an airplane! And then it breaks down, and they apologize that the internet's not working, and the guy next to me goes 'ugh, this is bullshit.' Like how quickly the world owes him something he knew existed only like 10 seconds ago!

Flying is the worst one because people come back from flights and they're telling you their story, and it's like a horror story. They act like their flight was a cattle car in the 40s in Germany. They're like, 'it was the worst day of my life! First of all, we didn't board for like 20 minutes and then they made us sit there on the runway for 40 minutes! We had to sit there!' Oh really? What happened next? Did you FLY in the AIR incredibly like a BIRD? Did you partake in the miracle of human flight, you non-contributing zero?! ... You're sitting in a chair in the SKY! Here's the thing: people say there's delays. Delays? Really? New York to California in 5 hours. That used to take 30 years! And a bunch of you would die on the way there, and have babies... you'd be a whole different group of people by the time you got there. Now, you watch a movie, you take a dump, and you're home!”
— Louis CK, Louis C K Generation of Spoiled Idiots
Tagged: generation, Millennnial, Technology, Youth, Younger
Share on Facebook
Share on Twitter 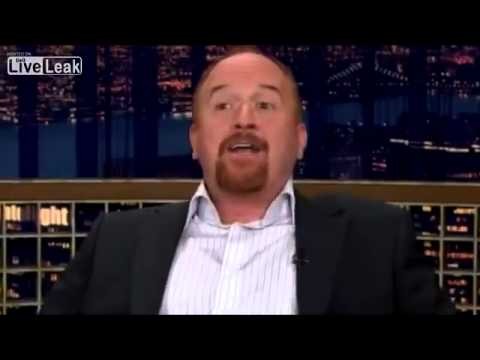