“He didn't notice a single face as he took a seat. He saw neither teacher nor students, and was aware only of the heavenly light in the room, an orange glow from the autumnal foliage outside. The room seemed full of a sweet viscous liquid, a honey nearly light as air, which he breathed in. Time slowed down, and in his left ear the ringing of the cosmic Om started up clear as a telephone. When we suggested these details had been laced with the same THC in his blood, Trip Fontaine thrust a finger into the air, the only time his hands stopped shaking during the entire interview. 'I know what it's like to be high,' he said. 'This was different.' In the orange light the students' heads looked like sea anemones, undulating quietly, and the silence of the room was that of the ocean floor. 'Every second is eternal,' Trip told us, describing how as he sat in his desk the girl in front of him, for no apparent reason, had turned around and looked at him. He couldn't say she was beautiful because all he could see were her eyes. The rest of her face — the pulpy lips, the blond sideburn fuzz, the nose with its candy-pink translucent nostrils— registered dimly as the two blue eyes lifted him on a sea wave and held him suspended. 'She was the still point of the turning world,' he told us, quoting Eliot, whose Collected Poems he had found on the shelf of the detoxification center. For the eternity that Lux Lisbon looked at him, Trip Fontaine looked back, and the love he felt at that moment, truer than all subsequent loves because it never had to survive real life, still plagued him, even now in the desert, with his looks and health wasted. 'You never know what'll set the memory off,' he told us. 'A baby's face. A bell on a cat's collar. Anything.'”
— Jeffrey Eugenides, The Virgin Suicides: A Novel
Tagged: Marijuana, Om, Trip Fontaine, Blue Eyes, Eternity, Flashback, Love, Descriptions of Perfect Love Ecstasy
Appears In: Quotes To Make You Smile
Share on Facebook
Share on Twitter 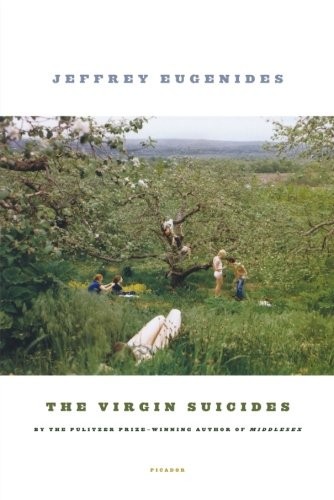 Read:
The Virgin Suicides: A Novel