“Ezekiel Stone: Bless me, Father, for I have sinned. It has been a long time since my last confession. I was a cop, and good at my job. I was married; I had a good life. Then my wife was raped. We caught the guy who did it, but he got off. So I tracked him down and I killed him.

Father Edward Salinas: This is a terrible, terrible sin, my son.

Ezekiel Stone: Two months later, I cornered this petty thief who had a gun. He opened up on me, and I took five bullets to the face and neck. I died. And because I had killed a man in cold blood, I went to Hell. You okay in there, Father? You know it's funny, but even in the most maximum security penitentiary, from time to time, inmates will escape. It happened on Devil's Island. It happened at Alcatraz. Six weeks ago... it happened in Hell. A hundred and thirteen of the most vile creatures whoever walked the earth escaped. And now they're back.

Father Edward Salinas: But the Prince of Lies, the master of Hell, surely having his subjects back on Earth spreading chaos and destruction, all this would bring a smile to his face.

Ezekiel Stone: Oh no, Father. You of all people know that even the devil has to answer to a higher power. He screwed up, and now he needs someone to fix things. Track down those creatures and... send them back to Hell.”
— Ezekiel Stone, Brimstone, Season 1: Pilot
Tagged: Sin, Bless, cop, Rape, murderer, Kill, Hell, Die, punishment, devil, God, Chaos, Higher Power, Biblical
Share on Facebook
Share on Twitter 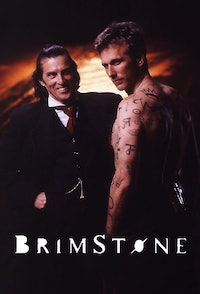