“A Conrad student informed me in Scotland that Africa is merely a setting for the disintegration of the mind of Mr. Kurtz.

Which is partly the point. Africa as setting and backdrop which eliminates the African as human factor. Africa as a metaphysical battlefield devoid of all recognizable humanity, into which the wandering European enters at his peril. Can nobody see the preposterous and perverse arrogance in thus reducing Africa to the role of props for the break-up of one petty European mind? But that is not even the point. The real question is the dehumanization of Africa and Africans which this age-long attitude has fostered and continues to foster in the world. And the question is whether a novel which celebrates this dehumanization, which depersonalizes a portion of the human race, can be called a great work of art.”
— Chinua Achebe, An Image of Africa/ The Trouble with Nigeria(Penguin Great Ideas) by Chinua Achebe (2010-08-26)
Tagged: Joseph Conrad, Africa, Heart of Darkness, Colonel Kurtz, Dehumanization, Colonialism
Share on Facebook
Share on Twitter 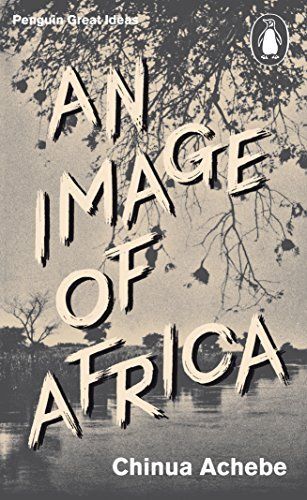 Read:
An Image of Africa/ The Trouble with Nigeria(Penguin Great Ideas) by Chinua Achebe (2010-08-26)