“Now I tried, secondly, to make it clear that in a sense forcing them into that position did not create violence but rather brought already-existing violence to the surface so that they recognized its existence and were able to deal with it. I pointed out that there are many, many times—and this is almost always true in the South or in any other situation where people have been separated for long periods of time and where general brutality is accepted—when basic social change will also involve a vast deal of physical violence, and the pacifist is not a man who is afraid of violence nor in a sense opposed to it because often social change cannot be made except under situations where violence is to a degree inevitable. The pacifist is opposed to using violence, but he must be prepared to accept it as a part of social change, knowing that social change is often impossible without it.”
— Bayard Rustin, Black History Month: A Letter from “I Must Resist” by Bayard Rustin

Excerpted from I Must Resist: Bayard Rustin’s Life in Letters Rustin to Beverly White May 3, 1950 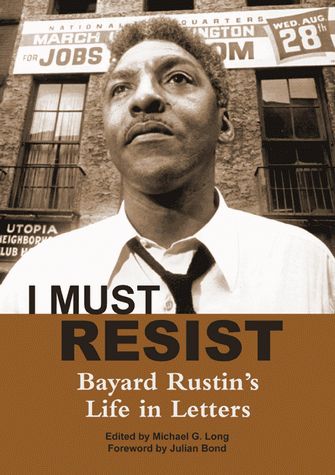 Read:
Black History Month: A Letter from “I Must Resist” by Bayard Rustin blogcitylights.com