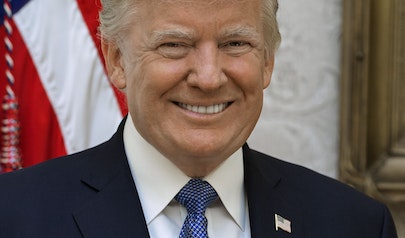 Total quotes: 513
“I don’t think many people would disagree that I tell it like it is.”
— Donald Trump, Crippled America: How to Make America Great Again
Tagged: Trump on Trump, Communication 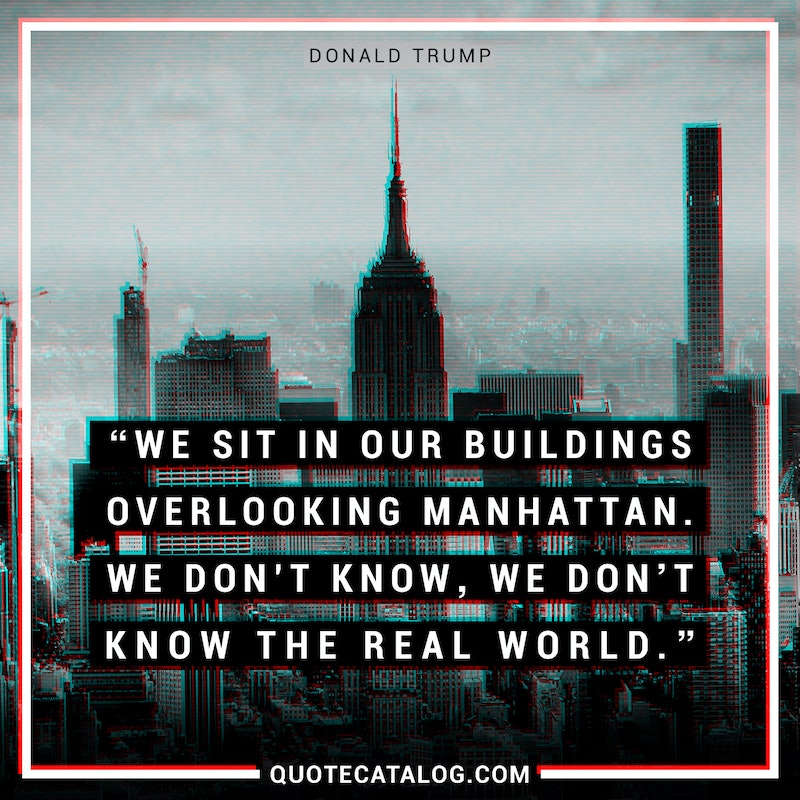 “We sit in our buildings overlooking Manhattan. We don’t know, we don’t know the real world.”
— Donald Trump, It's Like a Booze Cruise With Knowledge
Tagged: Wealth, rich, real world, Simulation, Disconnection
“Tough is being mentally capable of winning battles against an opponent and doing it with a smile. Tough is winning systematically.”
— Donald Trump, Donald Trump
Tagged: Defining Tough, aggressive, Politics, Heritage, article 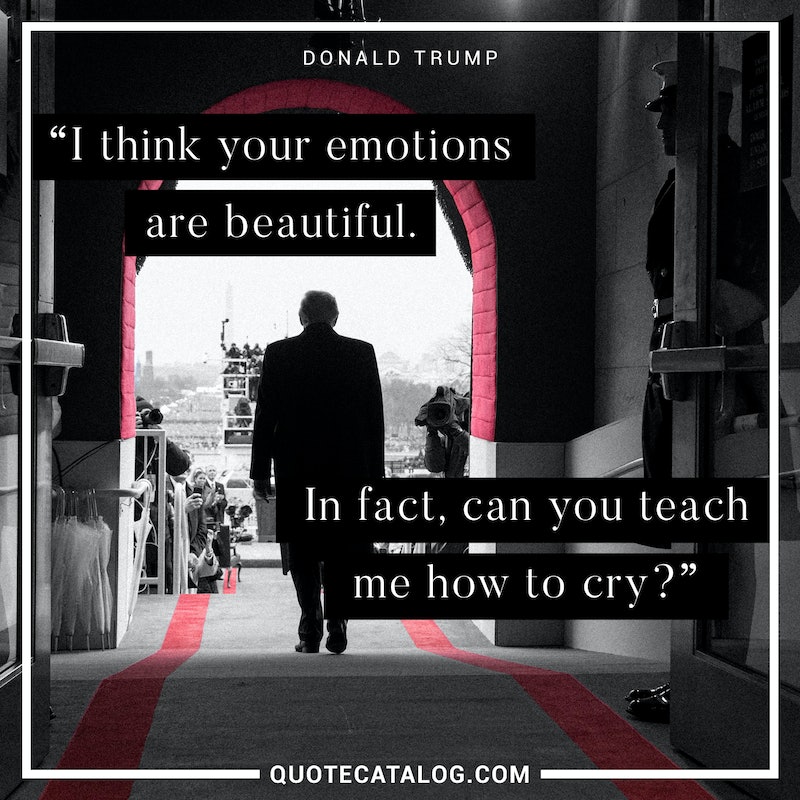 “I think your emotions are beautiful. In fact, can you teach me how to cry?”
— Donald Trump, The Apprentice, Season 11: The Final and You're Hired 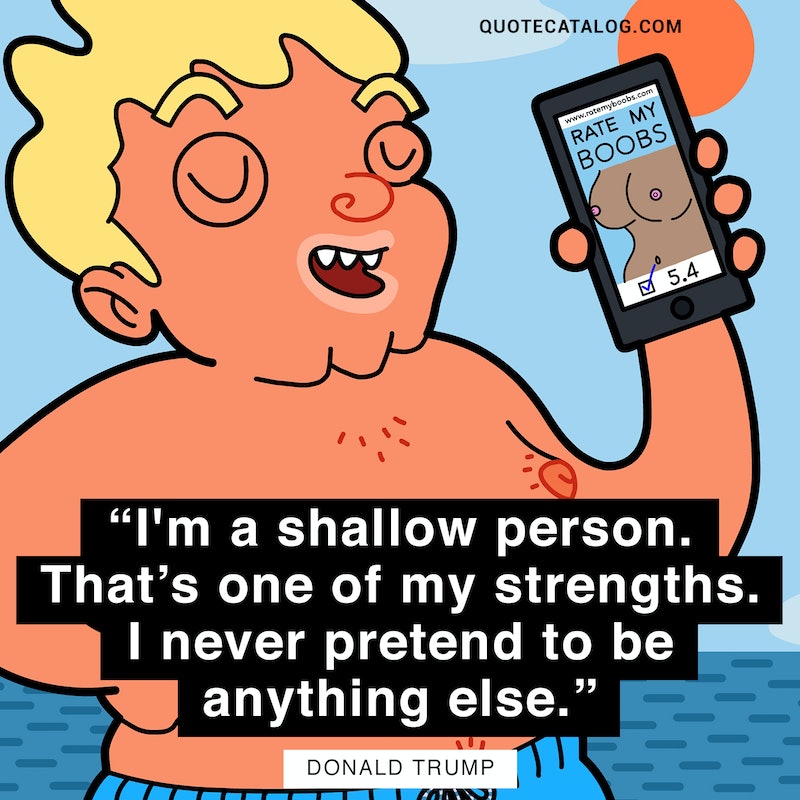 “I'm a shallow person. That’s one of my strengths. I never pretend to be anything else.”
— Donald Trump, The Death Of Journalism – Ken Ficara – Medium
Tagged: shallow, Nietzsche or Trump
“I should get an Emmy every single year, but they hate me so badly—these morons. They hate me so badly.”
— Donald Trump, The Apprentice, Season 13: Why I Fired Them
Tagged: Emmys, People Hate Me 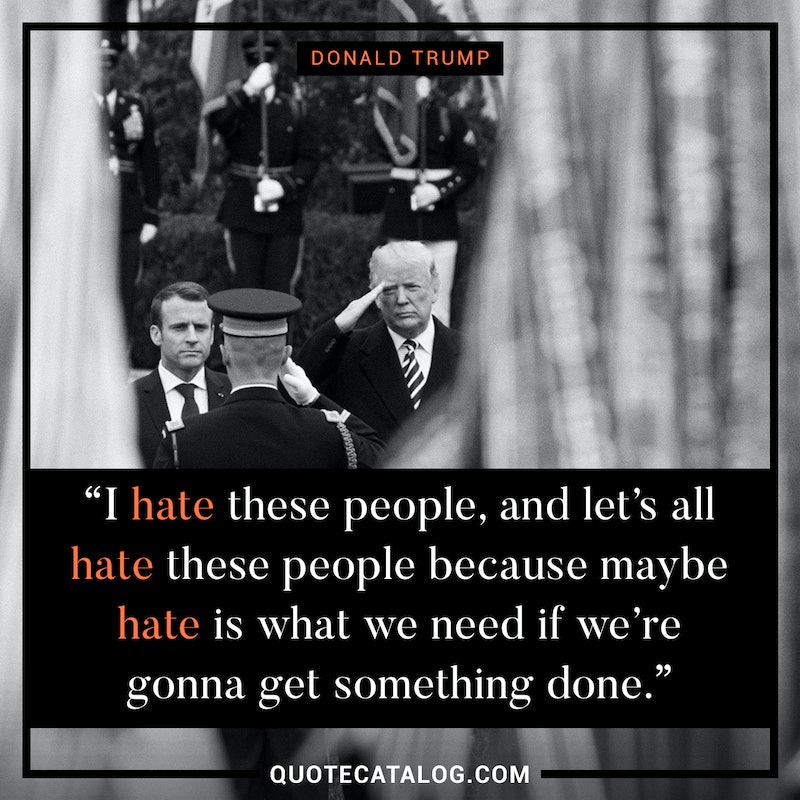 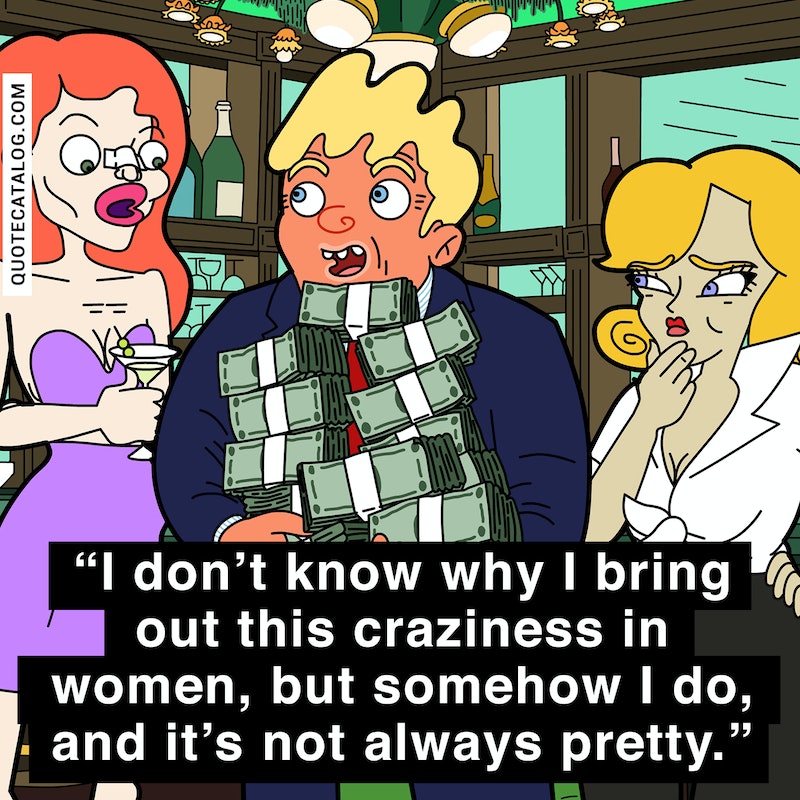 “I don’t know why I bring out this craziness in women, but somehow I do, and it’s not always pretty.”
— Donald Trump, Donald Trump's books reveal his obsession with women — and himself
Tagged: LOL
“Most people with mental health problems aren't violent; they just need help. We have to invest the money and resources to expand treatment programs that can provide that help.”
— Donald Trump, Crippled America: How to Make America Great Again
Tagged: Mental Health, Healthcare, Violence, Government 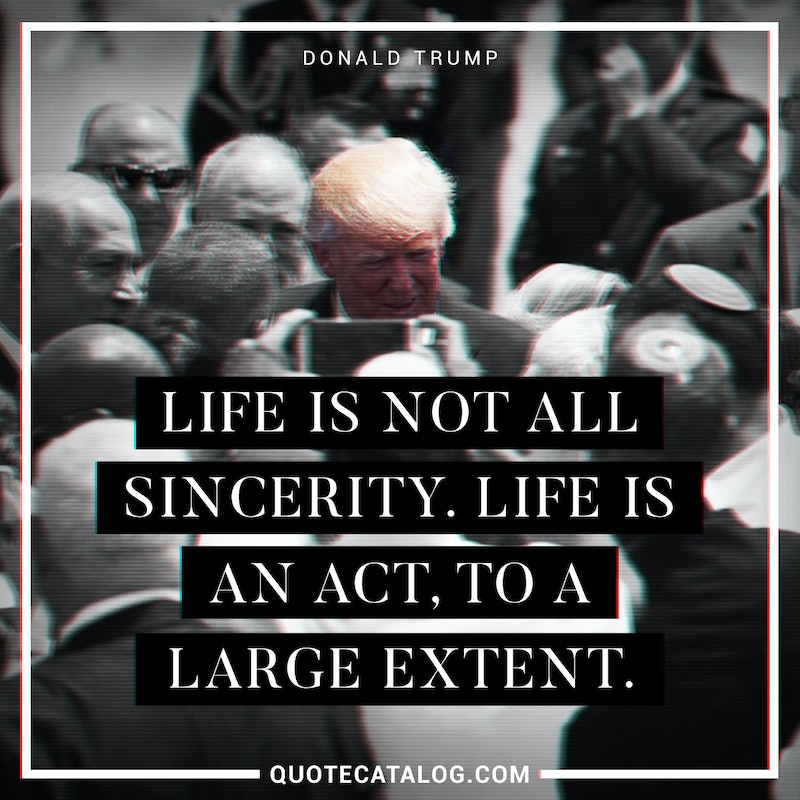 “Life is not all sincerity. Life is an act, to a large extent.”
— Donald Trump, Special Report- Why Trump Won. Aired 10-11a ET
“You treat me like a baby! Am I like a baby to you?”
— Donald Trump, Let Trump Be Trump: The Inside Story of His Rise to the Presidency
Tagged: Immaturity, Baby, Being Treated Like A Child 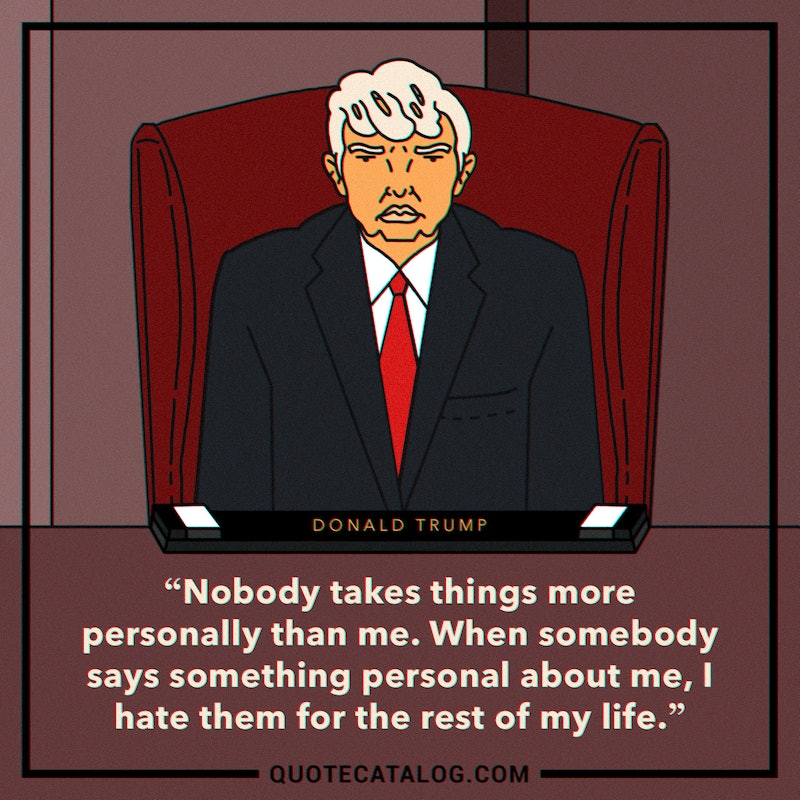 “Nobody takes things more personally than me. When somebody says something personal about me, I hate them for the rest of my life. It’s probably wrong, but I hate people. . . . Do you understand that? I hate ’em. . . . I never recover from it.”
— Donald Trump, The Celebrity Apprentice, Season 5: Backs against the Wal-Mart
Tagged: grudges, Hate, Interpersonal Antagonism, Ego, People
“"I will be the greatest jobs producer that God ever created.”
— Donald Trump, LIVE STREAM: President Donald Trump Press Conference(1-11-17)
“One of the keys to thinking big is total focus. I think of it almost as a controlled neurosis, which is a quality I’ve noticed in many highly successful entrepreneurs. They’re obsessive, they’re driven, they’re single-minded, and sometimes they’re almost maniacal, but it’s all channeled into their work. Where other people are paralyzed by neurosis, the people I’m talking about are actually helped by it. I don’t say this trait leads to a happier life or a better life, but it’s great when it comes to getting what you want.”
— Donald Trump, Wheeling With a Big Dealer
Tagged: Success, Getting What You Want, Focus, Neurosis
“He was a bad guy—really bad guy. But you know what he did well? He killed terrorists. He did that so good. They didn't read them the rights. They didn't talk. They were terrorists. Over. Today, Iraq is Harvard for terrorism”
— Donald Trump, Trump offers praise for Saddam Hussein's efficient killing of 'terrorists'
Tagged: Terrorism
“That’s why I am running: to end the decades of bitter failure and to offer the American people a new future of honesty, justice and opportunity. A future where America, and its people, always – and I mean always – come first.”
— Donald Trump, Full Replay/Transcript: Donald Trump Gives First Campaign Speech Since Hiring Bannon and Conway
Tagged: 2016 Election, Donald Trump
“She went to Italy to learn the language. Well, she learned the language.”
— Donald Trump, The Telegraph
Tagged: Amanda Knox, Aquital
“The Secretaries of State and Homeland Security may, on a case-by-case basis, and when in the national interest, issue visas or other immigration benefits to nationals of countries for which visas and benefits are otherwise blocked.”
— Donald Trump, Full text of Trump's executive order on 7-nation ban, refugee suspension
Tagged: Immigration, Visa, Trump Polices
“I’m not a politician, and have never wanted to be one. But when I saw the trouble our country was in, I knew I couldn’t stand by and watch any longer. Our country has been so good to me, I love our country, I felt I had to act.”
— Donald Trump, ​DONALD J. TRUMP DELIVERS GROUNDBREAKING CONTRACT FOR THE AMERICAN VOTER IN GETTYSBURG
Tagged: Election 2016, Donad Trump
“We don't make great deals anymore, but we will once I become president.”
— Donald Trump, Donald J. Trump On The Stakes Of The Election
Tagged: 2016 Election, Donald Trump
“They signed a pledge saying they will abide, saying they will back the candidate of the party. They broke their word. In my opinion, they should never be allowed to run for public office again because what they did is disgraceful.”
— Donald Trump, Trump Says GOP Opponents Should Support Him Or Be Banned From Office
Tagged: Election 2016, Politics
“Making America Great Again means standing by our word. We've watched President Obama draw a line in the sand, then another line in the sand, then no line at all. We've become an embarrassment to ourselves and to our history. ”
— Donald Trump, Crippled America: How to Make America Great Again
Tagged: President Obama, Syria, ISIS, Foreign Policy, Terrorism
“This is the legacy of Hillary Clinton: death, destruction and terrorism.

America deserves a better legacy. All of you deserve a better future. I am the change agent. Hillary Clinton is the defender of the status quo.”
— Donald Trump, READ: Full Transcript of Donald Trump Speech in Dimondale, Michigan
Tagged: 2016 Election, Donald Trump, Terrorism, Hillary Clinton
“If you have laws that you don’t enforce, then you don’t have laws.”
— Donald Trump, Crippled America: How to Make America Great Again
Tagged: Immigration
“As long as we are proud of who we are, and what we are fighting for, there is nothing we cannot achieve.”
— Donald Trump, Full text of President Trump's first State of the Union address
Tagged: Nationalism, Pride
“We’ll have a prenup. You have to have a prenup. I have friends that have been destroyed. Men that are killers, tough to deal with, and yet a wife, five foot two, one hundred pounds, destroys them.”
— Donald Trump, Howard Stern Comes Again
Tagged: Prenup, Divorce
“Congratulations to the Kansas City Chiefs on a great game, and a fantastic comeback, under immense pressure. You represented the Great State of Kansas and, in fact, the entire USA, so very well. Our Country is PROUD OF YOU.”
— Donald Trump, Oops: Trump congratulates ‘Great State of Kansas’ after Chiefs’ Super Bowl win
Tagged: Kansas City Chiefs, Kansas, USA 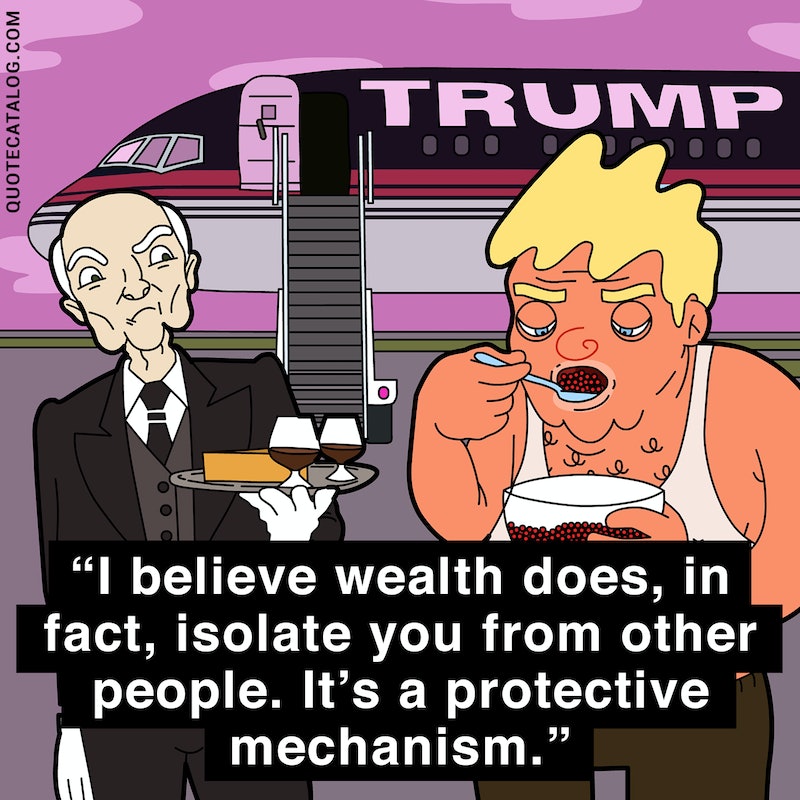 “I believe wealth does, in fact, isolate you from other people. It’s a protective mechanism.”
— Donald Trump, Interview with Donald Trump and Errol Morris
Tagged: Wealth, Money, Loneliness, Isolation, Isolation Of Being Famous
“Our country’s biggest enemy is the Fake News so easily promulgated by fools!'”
— Donald Trump, Trump calls media 'our country’s biggest enemy' right after Kim summit
Tagged: Fake News, Media, Against The Media, Media Madness, The Press
“Never had a drink. That’s one of my good things. Never had a drink, and I never had a cigarette. Other than that, I’m a disaster.”
— Donald Trump, Howard Stern Comes Again
Tagged: Alcohol, cigarette, Sobriety
“It’s a funny thing: the Republicans are known for business, and yet the economy always seems to tank under the Republicans.”
— Donald Trump, Howard Stern Comes Again
Tagged: Republicans, Business, Economy
“It's frankly disgusting the way the press is able to write whatever they want to write and people should look into it.”
— Donald Trump, Trump wages war on the First Amendment
Tagged: Free Press, Journalism In 2017, Media Censorship, President Trump
“Howard: Which is more important: talent or looking great?

Donald: I’ve had both, and I’ll take looking great.”
— Donald Trump, Howard Stern Comes Again
Tagged: Talent, Looking Great
“New York is the meanest city in the world. It’s the most vicious city in the world.”
— Donald Trump, The Celebrity Apprentice, Season 2: Toying With Disaster
Tagged: The Apprentice, New York City
“What does that mean—'a force of nature'? We’re all a force of nature.”
— Donald Trump, The Apprentice (U.S. TV series)- Wikipedia
Tagged: Nature, Force of Nature, High Energy
“America is a nation of builders. We built the Empire State Building in just one year – isn't it a disgrace that it can now take ten years just to get a permit approved for a simple road?”
— Donald Trump, 'This is our New American Moment' – Read excerpts from Trump's first State of the Union address
Tagged: Trump's State of the Union, Trumpism, American Infrastructure, Against Bureaucracy, Red Tape, America as a Place of Construction 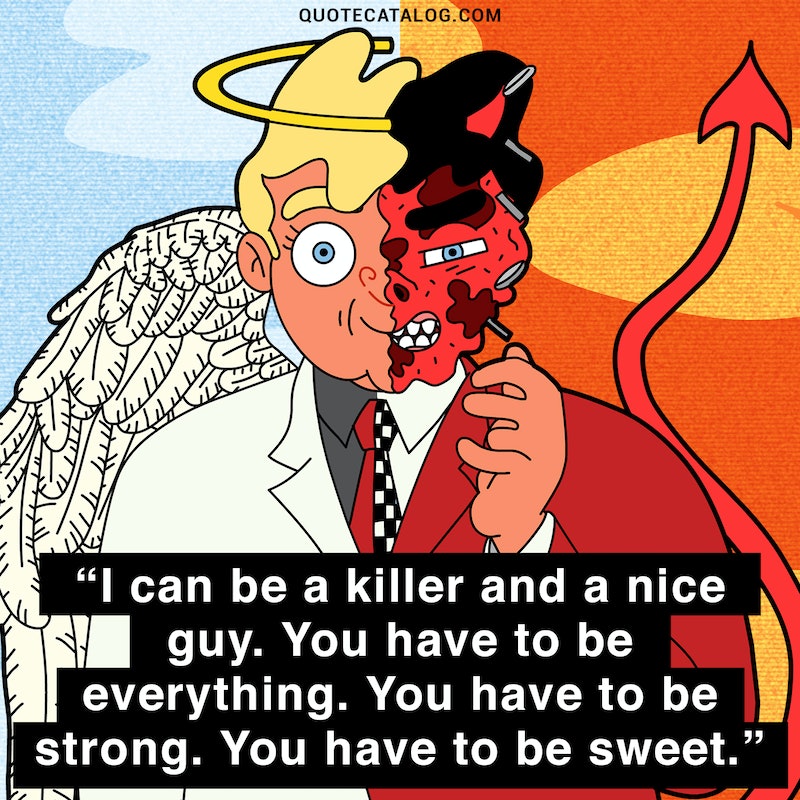 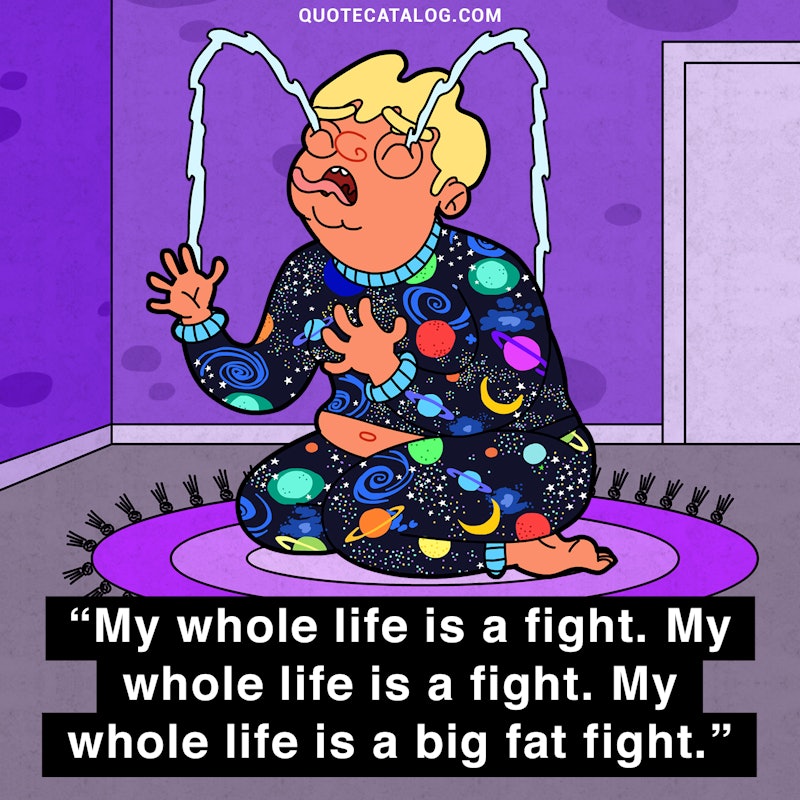