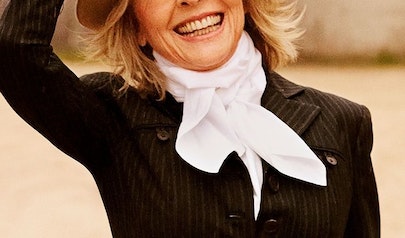 Total quotes: 8
“[Before shooting occurs at the Michael Corleone estate] Michael, why are the drapes open?”
— Kay Corleone, The Godfather: Part II
Tagged: shooting, drapes
“Kay: It made me think of what you once told me: 'In five years the Corleone family will be completely legitimate.' That was seven years ago.

Michael Corleone: I know. I'm trying, darling.”
— Kay Corleone, The Godfather: Part II
Tagged: Mafia, legitimate
“No one's unbeatable. It's a matter of patience, which means it's a matter of time.”
— Sister Mary, The Young Pope, The Young Pope Season 1: Episode 3
Tagged: Patience, Long-Term Game, Time
“Children are so lovely when they are three years of age. How can anyone abandon a three year old? Where do you find the nerve?”
— Sister Mary, The Big Bang Theory, Specials: Episode 6
Tagged: Orphans
“I know now that it's over. I knew it then. There would be no way, Michael...no way you could ever forgive me not with this Sicilian thing that's been going on for 2,000 years. [Michael loses control. He slaps Kay across the face. She falls onto the couch]”
— Kay Corleone, The Godfather: Part II
Tagged: Sicilian, Mafia, Violence Against Women
“Michael Corleone: What's wrong with being a lawyer?

Kay Corleone: Nothing, except he doesn't want it. He loves music; he wants his life to be in music.

Michael Corleone: Well, music is great. I love music but he should finish what he started. Anthony.

Michael Corleone: Your own way.

Michael Corleone: And what happens if you fail?

Michael Corleone: Men always believe that. With a law degree you're taking on insurance. After that you can do anything you want. You can work for me.

Anthony Vito Corleone: I will never work for you. I have bad memories.

Anthony Vito Corleone: I will always be your son, but I will never have anything to do with your business.

Kay Corleone: That he got from you. That 'no.'

Kay Corleone: Convince him of what?

Michael Corleone: He throws his life away. He throws greatness away!

Kay Corleone: This is greatness? You know, Michael, now that you're so respectable I think you're more dangerous than you ever were. In fact, I preferred you when you were just a common Mafia hood.

Michael Corleone: Why did you come here?

Kay Corleone: I came here to protect my son. I didn't come here to see you disguised by your church. I thought that was a shameful ceremony.”
— Kay Adams Michelson, The Godfather: Part III
Tagged: Church, law degree, Singer, Mafia
“Connie: [shrieking at Michael] You killed my husband! You waited until our father died so nobody could stop you and you killed him! You killed him! You blamed him for Sonny, you always did, everybody did. But you never thought about me. You never gave a dam about me. What am I going to do now?

Connie: Why do you think he kept Carlo at the mall? All the time he knew he was going to kill him. And then he stood Godfather to our baby. You think you know your husband? You know how many men he had killed! Read the papers. Read the papers! That's your husband! [Michael takes Connie into her arms, but she goes wild again and tries to attack him]

Michael Corleone: Take her upstairs. Get her a doctor. [Michael's bodyguards grab Connie and pull her out of the office...to Kay] She's hysterical.

Kay Adams: Is it true?

Michael Corleone: Don't ask me about my business, Kay.

Kay Adams: Is it true?

Michael Corleone: Don't ask me about my business...

Michael Corleone: [slams the desk] ENOUGH!”
— Kay Adams, The Godfather
Tagged: Murder, Gaslighting
“Oh, Michael. Michael, you are blind. It wasn't a miscarriage. It was an abortion. An abortion, Michael. Just like our marriage is an abortion. Something that's unholy and evil. I didn't want your son, Michael! I wouldn't bring another one of you sons into this world! It was an abortion, Michael! It was a son, Michael! A son! And I had it killed because this must all end! [Michael's eyes begin to bulge]”
— Kay Corleone, The Godfather: Part II
Tagged: Marriage, Abortion, Miscarriage, Taunting
loading next page...
“That's all there is; there isn't anymore.” —Ethel Barrymore